Recovery from the COVID-19 crisis will be slow. The crisis has impacted the economies of Finland’s most important trading partners, such as Germany and Sweden, and the second wave of the virus has not nearly been brought under control there either. The post-crisis recovery of these economies will take time, and there will therefore be weak demand on the international market for the goods and services of Finnish exporters. Finnish exports will begin to recover only gradually, and there will be less income from foreign trade in the immediate years ahead. Uncertainty over economic developments has caused companies in Finland, as elsewhere, to postpone or cancel investments, such as construction of new factories. Construction investment is also notably down on recent years.

Economic growth in the forecast years will depend on household consumption. Growth in household incomes will continue in the immediate years ahead, and consumer confidence will strengthen as the threat from COVID-19 fades. During the crisis, people have saved more than normally, as they have been concerned about their health or feared losing their jobs. Restrictive measures, too, such as restricting the opening hours of restaurants and bars, have reduced opportunities to consume. When there is no longer a need to fear the virus and people can once again have faith that the economy is improving, households will begin to consume more. Income left unused during 2020 can only further increase the possibilities to consume in the years ahead.

The government has supported households and businesses during the COVID-19 crisis. It has provided financial support to non-financial corporations, given tax relief and paid unemployment benefits to those who have lost their jobs or been furloughed. Government expenditure has far outstripped revenues, particularly in light of the substantial fall in tax revenues due to the economic situation. In addition, the position of the public finances was already weakened by the expenditure increases agreed in the Government programme prior to the outbreak of the COVID-19 crisis. Because of these factors, the general government deficit will deepen further, and debt increase an exceptional amount in a short period. As the economy improves during the years 2021–2023, tax revenues will grow again and unemployment expenditure will decline. As things look now, the public finances will even so remain in deficit in 2023, meaning expenditures will outstrip income, and it will not be possible to halt the growth in the debt ratio.

The forecast has risks in both directions, meaning the economy could develop better or worse than expected. The short-term economic outlook already contains uncertainty regarding how quickly the pandemic can be brought under control. A positive scenario would be if vaccinations can be brought into play already in the first half of 2021 and the economy as a result grow much more quickly than forecast. There remains, however, a danger that the epidemic will spread during the winter and the public will have to be protected by a wide-ranging shutdown of the economy. In the event the epidemic is prolonged the economy would contract further in 2021. In a worst-case scenario the COVID-19 crisis could leave a permanent scar on the Finnish economy. 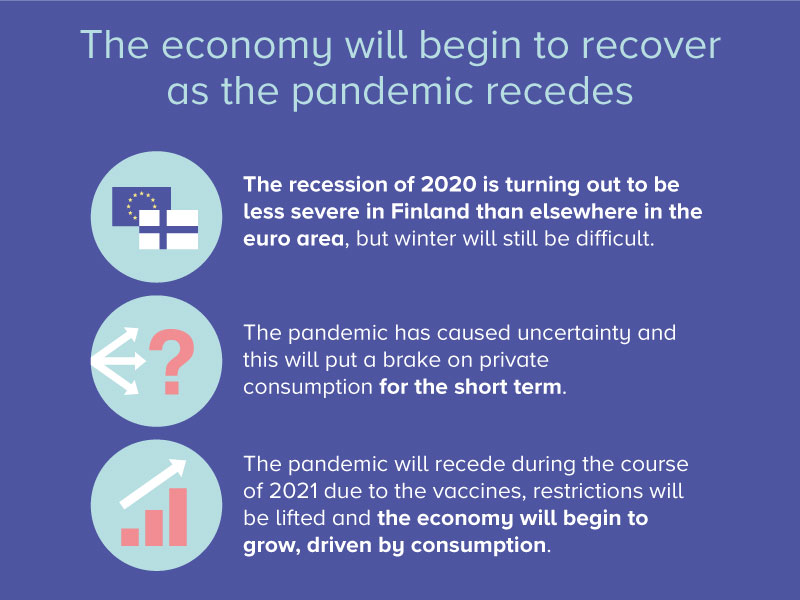 “Accessible summary: The economy will recover from the pandemic, but even after recovery, growth will be slow”